Since October 2013 I have been using PhraseExpander Pro v. 3, and then  v. 4, on a daily basis. (I have discussed the reasons for switching to PhraseExpander before here, and I also mentioned some crucial improvements to its algorithm here.) PhraseExpander has become an essential part of my writing setup, and not only because it is triggered by every single keystroke I type (though that is an important part of it). I use its SmartComplete feature not only to reduce the amount of repetitive typing, but also to help me remember long strings of coding (e.g. the HMTL code for inserting images or highlighting text in Gingko) and the aliases for anonymised people and organisations in my research.

In this post I just wanted to point out an improvement that was released in today’s version of PhraseExpander and which greatly improves the way it works in browsers. In previous versions the SmartComplete box would need to be manually positioned, and it would be stuck in the same position, regardless which part of the browser you were writing in. But in v. 4.3.0.1 now the SmartComplete box pops up right by the cursor, which makes it a great deal easier to use in a browser. This will be extremely useful when writing in an online service such as Gingko app, where different cards reside in different parts of the browser. Below is a screenshot of PhraseExpander’s SmartComplete box displayed by the cursor in Gingko in Firefox. I also tried it in Chrome, and it works the same. See the rest of the latest changes to PhraseExpander here. 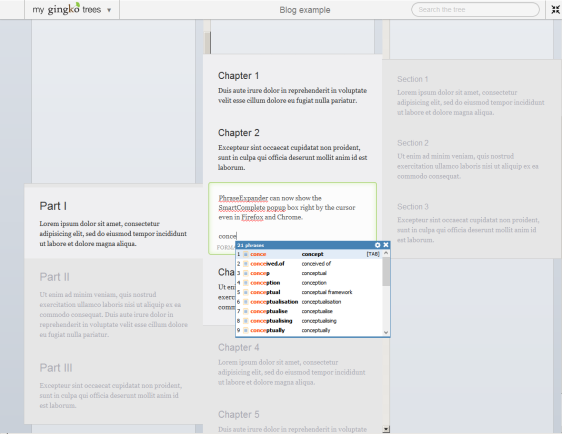 P.S. In the meantime I have discovered a number of other important benefits to the new handling of browsers in PhraseExpander. Now the SmartComplete box is displayed correctly in Chrome apps as well (i.e. standalone Chrome applications that can run offline), such as the one for WorkFlowy, which I use daily. Also, it can now be used more easily with Google Sheets and Google Docs, and to write emails in browser-based email services.